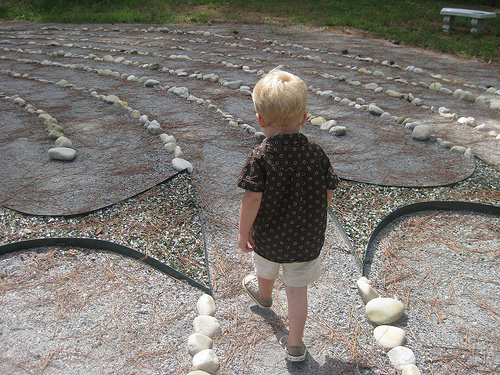 In the grip of the past

Maybe it’s because my programme on Mindfulness for Coaches with Michael Chaskalson  is about to start.  Maybe it’s because I’m noticing more stress in my clients as they deal with anxieties and pressures.  Maybe it’s because I notice I feel palpably calmer and fresher when I do my mindfulness practice.  Whatever the reason, I’m especially aware at the moment of thinking being opened up and outcomes being generated when leaders become aware of the present moment and free themselves of some old patterns and beliefs. Family patterns, for example, are both strong and subconscious, and until they surface into awareness they keep going on a loop, reproducing old messages but not generating new solutions.  This was the case for my client who, as a child, took on responsibility for keeping the family on track when his parents separated and the family entered a phase of disorder and instability.  As leader he was driven by control, micromanagement and overworking – not ideal behaviour when you reach Board level. Only when he became mindful of his feelings and thinking did the pattern change.

Other clients have spent precious mental energy on regret or guilt over past events or errors, in the course of which they denied their real capabilities the opportunity to deliver the results their organisations needed.  Focusing on, and accepting, things as they actually were released potential – and energy – they hadn’t previously been aware of.

I’ve seen a mindful approach deliver significant value to clients in the simplest – and yet the most powerful – of ways. Mindfulness allows us to slow down the mad rush that many of us find ourselves in on a daily basis, and opens up the space to be aware of thoughts, feelings, and physiological responses.  According to Professor Mark Williams, of the University of Oxford, UK, mindfulness is “a direct, intuitive knowing of what you are doing while you are doing it. It’s knowing what’s going on inside your mind and body, and what’s going on in the outside world as well. Mindful awareness is about learning to pay attention, in the present moment, and without judgement. It’s like training a muscle – training attention to be where you want it to be. This reduces our tendency to work on autopilot, allowing us to us choose how we respond” (see more at, for example, http://www.mindfulnet.org/).

In becoming more aware of what’s happening, I’ve seen clients – and I’ve experienced this myself too – discovering a new kind of clarity about what’s at the heart of a problem, choosing an emotional response to a given situation (rather than being at the mercy of emotions), and gaining a sense of calm which creates more effective thinking.

And all it takes is to dedicate a few minutes to focus on what you’re aware of.  Even three minutes to become aware of your breathing can have significant effects.  Indeed the neuroscience shows us that practising mindfulness on a regular basis actually changes the state of the brain so as to more consistently produce a mentally clear and alert state.

Pressure to deliver on targets, the stress of multiple, complex demands, and even trauma (which I see from time to time amongst my clients in clinical practice or working in war zones), the threat of change and the imperative to cope with transition –  all these require leaders to think clearly, to make decisions in full awareness of what they’re doing and of what’s driving them, and to avoid getting hijacked by unhelpful emotions.  Stress levels at work are arguably higher than at any time in history, and leaders I’ve coached manage it more effectively when they’re mindful.

A leader who breathes

I recently met up again with a previous client, a highly accomplished leader, who is under more pressure in an increasingly complex environment than she ever has been.  And she’s producing results she couldn’t have dreamed of before her coaching programme: she’s making more impact at the highest levels than she ever has done, and she’s enabling her team to release more of their potential than ever.  ‘What’s stayed with you from your coaching programme?’ I asked her. She gave me a list in response, the first item of which was ‘Breathing’.  Ironic and striking that she has created some of her best results by becoming profoundly aware of the most fundamental gift we have as human beings: to breathe.

Photo by Ruby Sinreich via Compfight