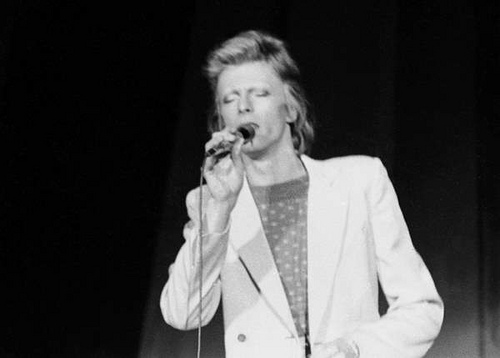 “I didn’t know if I should be myself or someone else. It seemed easier to be someone else….”

David Bowie, in the early stages of his career

The various manifestations of David Bowie

In fact, as the ‘David Bowie is’ exhibition during 2013 at the Victoria and Albert museum in London showed us, rather than being someone else, David Bowie (who died in January 2016) discovered many different realisations of himself over the course of his career: pop artist, visual artist, mime artist, costume creator….  Always hungry for as many different experiences as he could have, he absorbed the learning from them and creatively shaped it into countless different manifestations, revealing himself to be multi-talented.

I know next to nothing about pop, and I knew nothing about David Bowie before seeing this exhibition.  There are aspects of Bowie’s life and work that I find compelling and exciting, and others that I don’t find at all pleasing or attractive. However, what I find engaging about this story is his constant quest for learning and creativity through experimentation, his versatility and his courage to innovate and take risks, to claim his position ahead of the game (indeed to create the game), to inspire millions – in sum, to go where no-one had been before.  There are those who say he was among the most influential pop stars of his generation.  He changed lives and pioneered new ways of perceiving the world.

Interestingly, Bowie’s creations were not all entirely autonomous. He had a talent for collaboration and for working with the best people he could find in a whole variety of fields, including choreographers like Lindsay Kemp, photographers like Mick Rock, producers like Brian Eno and Tony Visconti, and fashion designers like Kansai Yamamoto.

I’m mindful too of the strength of diversity in collaboration: bring two very different talents together and the outcome can be dazzling.  Team-builders and organisational development professionals: take note.

Leadership, learning and the courage to pioneer

None of the leaders I coach have so far been nearly as flamboyant or as fiercely creative as Bowie.  However, it occurs to me that in a world of constant change and challenge, a world in which new situations and perspectives arise at a faster rate than ever before, there’s a message here for leaders.

The leadership that will take us forward in the most turbulent and fast-changing climate we have ever known, is, likewise, leadership that values learning, creativity and innovation, that reads the market and the system, and that has the courage to pioneer.  I’m reminded of marketing thought-leader and visionary Seth Godin, who talks of innovation as being more critical than ever before – and emphasises that we need to create – and give others – the opportunity to succeed or fail. The key thing is to learn from the experiences.

The freak becomes the unifier

By publicly forging his own way, and building massive success by uncompromisingly being who he was, Bowie demonstrated that not only are we free to be whoever and whatever we want to be – but that he did – after all – know how to be himself. As actress and model Tilda Swinton said at the opening of the V&A exhibition, the freak became the great unifier.  Leaders who are courageous enough to stand up for what they claim as their values can likewise unify, inspire, engage and capitalise on the talent of their people.

Photo by  Hunter Desportes via Compfight