Career refocus: stepping off the treadmill 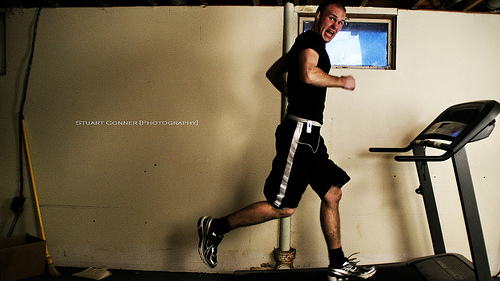 I’ve had a stimulating conversation with an integrative psychotherapist.  His approach takes account of a variety of psychological and psychotherapeutic models of human functioning, considering them all within a dynamic systems perspective: each is considered to provide a partial explanation of behaviour and each is enhanced when it’s selectively integrated with other aspects of the therapist’s approach.  So this approach and mine have something in common.

Getting off the treadmill

We discussed the contrasts and similarities between therapy and executive coaching, and he asked me a question which gave me pause for reflection. ‘You work with high achievers,’ he said. ‘I imagine many of them feel like they’re on a treadmill, stressed and under pressure.  I wonder if they question what it’s all for.  Your work with them means they discover more of who they really are – and yet you say it’s exceptional for any of your clients to choose to make a radical change towards getting off the treadmill.  Why do you think that is?’

What’s it all for?

Yes, some of them do question what it’s all for, and why they’re tolerating a job or an environment or a boss or colleagues that they feel so at odds with.  I can recall several clients who began their coaching programmes saying ‘I can’t bear things as they are.  What am I going to do next?’.

Resolving the dilemmas and tensions

The answer to the psychotherapist’s question starts with my belief – and indeed my experience – that if a client doesn’t resolve their dilemmas or tensions or conflicts in their working environment and they change job, those dilemmas and tensions and conflicts will go with them.

And what they often say when they reach the end of their coaching programmes is that in some way they feel integrated, that they’ve brought together contradictory parts of themselves and that they’ve learnt how to manage their conflicts with their environment.  They feel more like ‘a whole person’, bringing together insights into their talents, their skills, their values, their passions and their purpose, and applying them so as to release their capabilities.

Handling difficulties – and refocusing the career

Equipped with that sort of clarity, clients discover options for handling the difficulties differently, for managing the stress and pressure, for building their resilience, and for creating opportunities to bring more of themselves to work.  Some of them realise they are in the right role.  For others the work is explicitly about refocusing their careers: they engage in a process of career development which means they decide it’s time for the next career step and which may lead them away from their current roles. Yet surprisingly few decide they want to walk away from the rat race completely.

Whether they’re staying or leaving, they all learn how to make decisions and judgments in fuller awareness of who they are, what they need, what they’re prepared to sacrifice or tolerate and what they’re capable of.  Their career decisions get made with a fuller sense of awareness, within a context of well thought-through perspectives, rather than being based on emotion, stress, exhaustion or just not seeing broader horizons.

A new job – or making something different of the current job

I remember working with a doctor of pre-hospital medicine who felt demotivated, despairing, trapped in the system and believing she was compelled to become the consultant she didn’t want to be.  By the end of her coaching programme she had not only become very clear about what she did want of her career but she had also designed a way of creating a path towards that destination, beginning with making more of the role she was in.

I recall too the immensely talented Sales and Marketing executive in a new role with a multinational telecommunications company who, when he came to coaching, felt as though there was no fit for him in his role and was intent on moving on.  By the end of the programme he realised that having explored the choices, he was in completely the right role.

And the talented project manager in financial services who almost jumped ship when she was headhunted to go to a similar role in a different institution.  She realised through coaching how much she was seduced by the thought of change – and instead of leaving she stayed and carved out a new role for herself which met her values, her strengths and her aspirations.

They all gained a different perspective on their working identities, and how to manage their career challenges with authenticity and a greater sense of balance.

So I’ve found half an answer for the psychotherapist.  And I’m still intrigued as to why so few clients decide to swap high-pressure organisational life for an allotment and home-made bread.  More food for reflection ….

Photo by Stuart Conner via Compfight