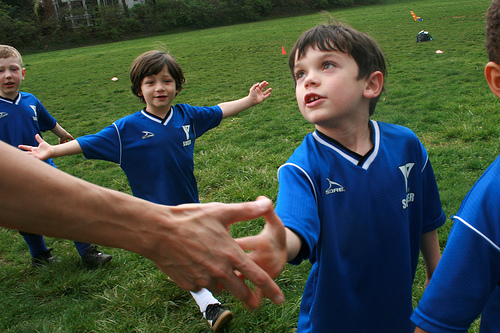 Three mothers in their early 30s are chatting in the playground.  Their four year-olds are playing nearby, until one of them wants her mother’s attention.  The child runs up to her mother and asks ‘Mummy?’.  No response (mother’s chatting). Again: ‘Mummy?’.  No response. ‘Mummy!’ (louder now, and still no response – mother deep in conversation). ‘MUMMY!’  Mother turns on the child and berates her for shouting and disturbing her. She sends her back to her little friends without any enquiry as to what the child wants or needs. The child, looking despondent, wanders back to her playmates and then suddenly starts screaming at them.  Definitively not end of story for that child: one could speculate that this isn’t an unfamiliar situation for her, to have the expression of her need rejected and the contact with her mother disturbed or even broken.

The impact of not being heard

Suppose for a moment that this is a familiar situation to the child. What message will she carry into the world as she grows up?  That she’s not worth listening to – and a lack of self-worth? Puzzlement as to how to express what she needs if her mother – the model of authority and care in her world – isn’t hearing her? That she’s not respected for what she wants to say? Might she translate any of this frustration into challenging behaviour?

This is apparently a small incident, but it strikes me as totally transferable into the workplace (and unfortunately actually transferred for millions of people at work).

I have the privilege to witness small children being brought up by parents who have always listened to them, who respect them as human beings with needs and wishes and motivations of their own, who listen well and pay them full attention when they’re talking or crying, and who encourage them in their explorations of the world rather than pushing them to any particular result.

This is all about relationship. Through healthy relationships individuals flourish, they become balanced and resilient, and they contribute to the world around them with energy and commitment.  In such circumstances it’s relatively easy for people to learn how to manage their emotions by articulating them and being heard rather than judged.  The messages for leadership are clear.

I wrote in an earlier blog about relationship as the leader’s secret weapon, and I’ve been reflecting on what makes for relationships that get results at work, and particularly relationships between leaders and followers.  Relationships are a two-way process, an interaction.  The way one party in a relationship behaves will have a particular impact on the other, who will then respond (or perhaps react) to that impact …. And so on, backwards and forwards.  Interpretations of the other’s behaviour are made and retained, building harmony, likeability, trust – or maybe antipathy and irritation.

The core of relationships: respect

I suggest that the core feature of any healthy relationship is respect by both parties for the other. By this I mean acknowledgment by each person in the relationship of the other as worth taking account of, entitled to be treated with humanity and integrity, and as capable and autonomous.  I don’t mean the kind of respect that is crushing and silencing, but rather the kind that recognises the other person as a human being with valid needs and motivations and opinions.

We’ve all seen (or been part of) people at work being treated with a lack of respect, which at its worst can be demeaning and humiliating, but even in a mild form can be dismissive or distracted.

Closely allied to respect is care: not a stifling or disabling care, but rather care that demonstrates interest and engagement.  Care that steps away from self-interest and is characterised by a generosity of spirit, a willingness and capacity to engage in the other’s experience.

And closely connected to both respect and care is listening: listening with attention.  One of the leading figures in the field of listening is Nancy Kline (she actually received ‘Listener of the Year Award,’ awarded by the International Listening Association).  Her philosophy is that the quality of our thinking is directly proportional to the quality of the attention we’re given.  She writes: ‘So what does this kind of attention, this deep listening, that ignites the human mind look like? Ironically, it is mostly invisible. It goes on on the inside. It is quiet. It hardly speaks. This kind of listening is based on the courage to trust your client’s own intelligence.  When you are listening in this way, when you are offering deep attention, you are beaming. You are beaming belief in your client’s ability to come up with their own answers, to find their own way. You are more drivingly interested in what is real and true for the client than you are frightened of being outshone or of being proved wrong. Your attention is not a technique. It is a presence’ (for more, see http://www.timetothink.com/uploaded/Attention%20Stunning%20Catalyst.pdf )

This is the beginning of a mini-series on relationships: there will be more to follow in the coming weeks.

Photo by woodleywonderworks via Compfight